Bioscope study ordered by SA Dynamized Technologies on 13.09.2016 on the basis of a device applying the principles of dynamization similar to the Biodynamizer®.​

Process: The Bioscope is a spectrometer which analyses changes in the electrical properties of water following the emission of a low frequency electrical signal (136 Hz) sent into the water via an electrode. The interpretation of the measurements (distortion between transmitted & received signal) is computer assisted. The analysis mainly focuses on energy displacements (in terms of electrons / protons), electrical field dynamics, in particular towards the low frequency ranges = frequencies emitted by the “living” * = notably the cells​

* William Ross Adey professor of anatomy and physiology at the University of California “Electromagnetic Fields and the Essence of Living Systems »:“Laboratory studies have tested a spectrum of EM fields for bioeffects at cell and molecular levels, focusing on exposures at athermal levels. A clear emergent conclusion is that many observed interactions are not based on tissue heating. Modulation of cell surface chemical events by weak EM fields indicates a major amplification of initial weak triggers associated with binding of hormones, antibodies, and neurotransmitters to their specific binding sites. Calcium ions play a key role in this amplification. These studies support new concepts of communication between cells across the barriers of cell membranes; and point with increasing certainty to an essential physical organization in living matter, at a far finer level than the structural and functional image defined in the chemistry of molecules.There is increasing evidence that these events relate to quantum states and resonant responses in biomolecular systems, and not to equilibrium thermodynamics associated with thermal energy exchanges and tissue heating.”​ 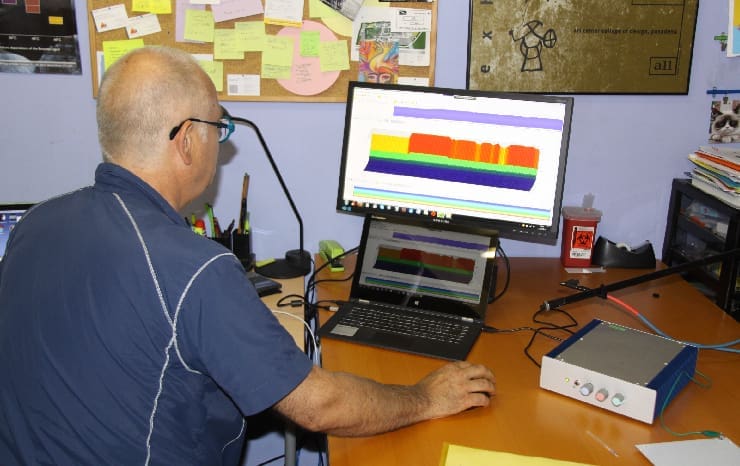 The Bioscope observes a much greater frequency biocompatibility in dynamized water​

Surface spectrum before & after the passage of water in the dynamizer: the water pulses towards low frequency levels​

1/ Dynamized water observed by the Bioscope seems to have greater frequency biocompatibility due to:​

2/ A plant watered by dynamized water will absorb more energy and have better electrical stability!​